What’s Next for Ethereum?

The Merge changes everything for ETH in 2022. Here's an overview of what it means and what to look out for

Ethereum is now a Proof-of-Stake Blockchain following the success of the Merge.

Ethereum uses Proof-of-Stake, but this wasn’t always the case.

An upgrade from the original Proof-of-Work mechanism to Proof-of-Stake called The Merge launched in September 2022.

The Merge refers to the original Ethereum Mainnet merging with a separate proof-of-stake blockchain called the Beacon Chain, now existing as one chain.

PoS uses much less electricity to mine than PoW cryptos (like Bitcoin) but many people fear the move may also make Ethereum less decentralized and therefore more vulnerable to manipulation and centralized control.

A lot of people believe that these changes: reducing mining fees and burning tokens with each transaction, may lead to an increased value for ETH.

Early in 2016, Ethereum set up a way to source community funds, allowing users to decide where they will be delegated.

Back in 2016, a major hack resulted in a lot of the community funds being stolen which in turn led to a hard fork as a way to return the stolen funds. But some members of the Ethereum community didn’t want a hard fork and they  branched off into a new cryptocurrency using the old blockchain. They called it Ethereum Classic.

Other forks enabled the Ethereum network to grow, becoming more efficient and easier for users and developers to navigate.

All this has set the stage for Ethereum 2.0, a brand-spanking-new upgrade that will transition from Proof-of-work validation to Proof-of-stake. 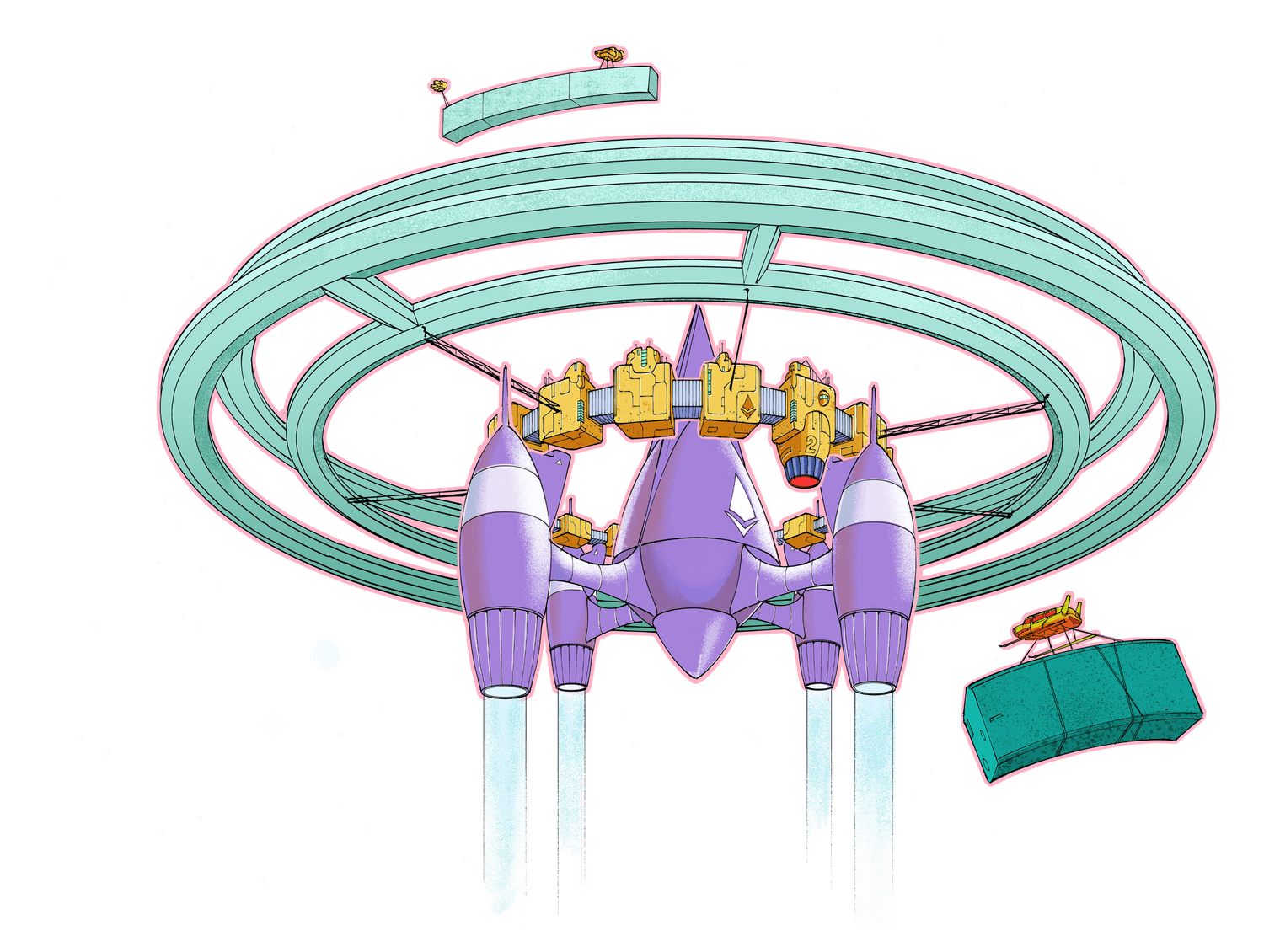 The Merge was executed on September 15, 2022. This completed Ethereum’s transition to proof-of-stake consensus, officially deprecating proof-of-work and reducing energy consumption by ~99.95%.

Why did Ethereum change to Proof-of-Stake?

Imagine a highway – as more and more vehicles use it at the same time, it gets crowded and slows down.

However, in the blockchain, people who paid a higher toll fee, called Gas, incentivized their transactions to go through first.

To keep up with faster blockchains and so-called “Ethereum killers”, several forks began being implemented to address these issues.

Forks are changes to the rules of the Ethereum protocol which often include planned technical upgrades. This is a look at a few of the forks that have shaped the course of Ethereum’s relatively short history.

The full timeline and history is on ethereum.org.

The London Hard fork rolled out in the first week of August, leading to major changes in the way that Ethereum functions and also introduced a mechanism that actively reduces the supply of Ethereum. To do this, it passed five EIPs that deal with fees and scaling while making mining more difficult.

EIP-1559 added a base fee to every single transaction, meaning that part of the reward miners and validators would previously receive will now be destroyed. Mining, as a result, became less productive, while the amount of Ethereum overall began to decline. This is like the umami center of our main course, the sirloin steak or perhaps freshly cooked and seasoned salmon, or if you’re particularly blasphemous it is a slice of seitan.

Next in line was EIP-3529. This proposal prevents certain refund operations that add congestion to the network, and close a minor gas loophole. The refunds are “used for when the gas fees become low on the network, people will fill up the network with basically junk data,”

Tim Beiko, one of the core developers of Ethereum explained.

“And then when the gas fees are high, they’ll delete all that junk data and get those refunds back.”

Here, this is EIP-3198, a proposal that ensures your fees aren’t being overpaid. It makes pricing smart contracts a lot more transparent, making your DeFi transactions go down easier. In our meal, the lemon can enhance and reveal more about the flavor of our dish.

EIP-3554 does just that, making mining Ethereum through proof of work harder. Ethereum version 2.0 will use Proof of Stake as a validation mechanism, so this proposal sets the stage. But not to outshine the rest of the dish, this massive increase in algorithmic difficulty will hit miners and validators in December. That means a validator would need to expend significantly more computational work and electricity to solve harder and harder problems for dwindling rewards.

Of course, there’s always some decorative garnish EIP-3541 which doesn’t serve a specific purpose yet.

Ethereum 2.0 is built in separate stages in forks.

We start with an appetizer, something to appease a hungry stomach but leaving you with a desire for more. The appetizer in our Ethereum 2.0 meal was set up on April 15th of 2021. Ethereum’s developers issued an upgrade, colloquially known as the Berlin Hard Fork.

To address the increased price of gas fees, several Ethereum Improvement Proposals (EIPs) were  voted on and implemented.

The first of these was EIP-2565 and EIP-2930 which implemented an algorithmic function to reduce the cost of Gas fees.

Next, the EIP0-2178 protocol made transactions backward compatible, making it easier to implement changes in future forks.

EIP-2929 introduced gas fees for certain transactions that would limit the incentives for a Denial of Service attack. While in itself, it wouldn’t have a high impact, it sets the stage for the next series of forks.

Will all of this make ETH more valuable?

That’s what they say.
According to many people in the crypto space, it’s not a matter of if but when ETH will surpass BTC for the number one spot.

Since the London fork, Ethereum network capacity increased approximately 9% while its value increased from around USD $2700 on August 6th to $3166 USD on August 30th. Without access to a parallel universe, with an Ethereum blockchain that didn’t experience this upgrade, it is hard to tell what proportion of this increased valuation is attributed to the London Fork.

Nonetheless, it makes investors concerned with climate change and sustainability more comfortable in their Ethereum investment as Ethereum 2.0 is poised to cut its energy consumption by around 99.95% by moving away from Proof-of-Work.

With Ethereum being burnt/destroyed with every piece of data added to the blockchain, the supply has started to decrease. Since there is still a high demand for Ethereum, the declining supply may signal higher and higher prices for Ethereum. Most importantly, Ethereum now needs to keep an eye out on other blockchains that are already faster and have lower gas fees. Is it possible for future forks to reduce or even eliminate gas fees while increasing scalability?

The Ethereum network is a decentralized ecosystem (blockchain) that allows the community to submit and vote on improvement proposals. These improvement proposals, if accepted, are often implemented in hard forks which force all machines and validators on the network to switch to the new version. Early in its life, Ethereum faced several denial of service attacks and used hard forks to patch up the holes in its security.

The recent Berlin and London upgrades set the stage for the launch of Proof of Stake Ethereum . While the Berlin upgrade was relatively inconsequential in the short term, it set the stage for the London fork. Here, several proposals were implemented to address scalability concerns and reduce the network’s reliance on mining as it moves away from Proof-of-Work.

Importantly, some of the transaction fees that used to go to miners as a reward will now be burnt. As Ethereum scales and begins to become scarcer through burning, it may become efficient enough to defeat the so-called “Ethereum killers”. Additionally, it is set to become significantly more energy efficient as it switches to a Proof-of-Stake method of validation.

If you want an even more comprehensive breakdown of Ethereum and the upgrades and technology being implemented, listen to the Lex Fridman Podcast #188 where he sits down with Ethereum founder Vitalik Buterin.

They go through everything from the SHIB coin billion dollar giveaway to the complete Ethereum roadmap and cover a lot of things in between.

What’s so Great About Cardano (ADA)?

Cardano was created in response to challenges faced by Bitcoin and Ethereum.