The Blockchain Revolution: Why Are Some Experts Critical of Crypto?

Since the development of Bitcoin, crypto enthusiasts have focused on improving blockchain tech and scaling it. But what does the blockchain actually do?

What’s all the fuss about anyways?

What makes the greatest experts and teachers so good at what they do is  the ability to break down complex topics in a way that anyone can understand.

But in the real day-to-day world, most people suck at explaining concepts, even when they believe they have a good understanding of it. People are often embarrassed to admit they don’t understand how something works in enough depth to explain it. Or they try unsuccessfully.

Could you explain the concept of the blockchain?

Can you describe how it works and what it’s used for in the simplest possible terms?

A lot of people who buy into cryptocurrency make potentially risky investments simply because they haven’t dived deep into the topic of blockchains.

Considering blockchain technology lays the foundation for nearly all of the top cryptocurrencies and tokens, it is crucial to have a good understanding of what you’re investing in. After all, if you find out the tech isn’t as great as you thought it was, you might decide against making such a large investment in it.

A blockchain is a database, like an Excel document, where the entries cannot be edited afterwards. And the entries in the database are cryptographically verified by a bunch of different computers, in different locations which all have a copy.

Ok so, what is all this tech mumbo-jumbo and what can a blockchain be used for?

A Brief History of Blockchains

While most people gained their first exposure to the blockchain from Satoshi Nakamoto’s Bitcoin white paper, the idea had been already circulating for decades. The blockchain is described as this impressive database that provides transparency and decentralization, often by making transactions public or searchable.

Even in the 1970s, the cryptography community had been playing around with the idea of the blockchain. In 1982, David Chaum proposed blockchain-like protocols in his thesis entitled Computer Systems Established, Maintained, and Trusted by Mutually Suspicious Groups.

However, the technology didn’t reach any meaningful adoption until the relatively recent boon in cryptocurrencies.

Bitcoin introduced a currency that was tracked and validated using underlying blockchain technology, allowing users to send Bitcoin back and forth without a central intermediary. It uses a Proof-of-Work system to make the database (blockchain) more secure, making it prohibitively expensive for anyone to introduce fake transactions.

Other blockchain-based networks like Ethereum introduced the ability to add bits of code onto the blockchain and even host applications.

This all sounds pretty cool, so why isn’t everything running on the blockchain and why has it largely been relegated to the world of crypto? 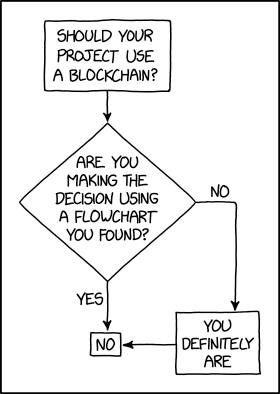 One way to receive a quick ban from a cryptocurrency subreddit or telegram chat is to ask whether the technology is used anywhere. While many large companies have had press releases showing that they’re “looking into” the blockchain, it doesn’t materialize into much besides a lot of coverage in crypto outlets.

Plenty of prominent computer scientists and software engineers have come out with critiques of the blockchain based on its actual limitations. Most importantly, there doesn’t appear to be a use case where the blockchain makes something simpler or easier.

A taste of the critique

A letter co-signed by 1500 computer scientists, software engineers and technologists was sent to congress, outlining a critique of blockchain-based technologies in their current incarnation.

The lead signatories included many leading figures within computer sciences like Grady Booch, the originator of the term and practice of object-oriented design in computer programming.

It argues that the blockchain is very limited in its uses:

“Not all innovation is unqualifiedly good; not everything that we can build should be built. The history of technology is full of dead ends, false starts, and wrong turns. Append-only digital ledgers are not a new innovation. They have been known and used since 1980 for rather limited functions.”

And that it is poorly-designed for other applications:

“Despite more than thirteen years of development, it has severe limitations and design flaws that preclude almost all applications that deal with public customer data and regulated financial transactions and are not an improvement on existing non-blockchain solutions.”

Of course, the expertise is not beyond Twitter criticism:

Decentralization might be new, but that doesn’t always mean improved.

One of the advantages of the blockchain that’s commonly cited is the decentralization aspect. Rather than having one person or node in control of a system, it is distributed among many different people or computers.

In the case of the blockchain, it means that the Bitcoin or Ethereum network are secured by many different machines engaged in verifying and validating transactions that go through the network. One machine being taken offline doesn’t necessarily tank it. But it also introduces inefficiencies within this context.

In terms of security, it means exerting large amounts of energy through Proof-of-Work mechanisms. While other validation methods have been proposed, they may negatively impact the security of the entire network.

For example, some users awaiting the release of Ethereum 2.0 are staking their Ether, earning yields that are rewarded when Ethereum 2.0 goes live. Roughly 33 percent of all this staking is done through the Lido protocol, centralizing the supply. With Proof-of-Stake, generating fraudulent transactions becomes less challenging.

Bottom line: depending on what you’re doing, decentralization can induce inefficiencies. This is in part why many corporate or enterprise databases are not widely decentralized.

Information about transactions is organized into discrete units called blocks, which are then verified and added to the blockchain. But the problem is that these structures impose limitations on the amount of data that can be processed at a single time.

As an example, Bitcoin can process roughly 3 to 7 transactions per second with about 10 minutes of latency, and a maximum of 1 MB of data.

For widespread adoption of Bitcoin as a payment service, other services need to be packaged on top of the base layer. The most popular add-on is the Lightning Network which to-date, has not proven to be an effective solution for this problem (despite years of development).

Some computer scientists question the plausibility of the Lightning Network as a whole, suggesting it may never be able to scale.

Bitcoin peddlers have been saying for more than 3 years "Buy bitcoins now, because the scaling problem has been solved by the LN. It has challenges ahead, like path finding, that are too complicated for you to understand; but we are optimistic." >>

You need to make a bitcoin transaction to open a lightning channel. So it would take about 25 years for everyone in the world to open a single channel, presumably to their … bank?

With Ethereum and other projects that offer smart contracts, the problem is compounded by the immutability of the blockchain. Once any information or code is added to the blockchain, it can’t be changed.

This means that people will develop apps with vulnerabilities that cannot easily be repaired.

Scaling would only reintroduce these issues within a wider context. Many companies may view this as a security risk and avoid adoption all together.

Issues with Common Use Cases

Forget about cryptocurrencies and payment, let’s look at the promise of the blockchain and break down where it might or might not work.

There are several use-cases that appear solid but fall apart under scrutiny.

This isn’t to say that there isn’t anything useful a blockchain can do, but rather its uses may be significantly more limited than advertised. Keep this in mind when deciding whether to invest in any new  blockchain-based product or company. Make sure to do your research and apply critical thinking to determine whether something is a real, tangible use-case that requires the blockchain to make it work well.

The blockchain isn’t new or revolutionary. The first inklings of this technology emerged in the 1980s and is mostly relegated for very specific corporate uses that are private and centralized. Most blockchains have issues relating to their scalability and its immutability. Basically, it functions like an Excel spreadsheet where you can only add new information and can’t change or edit out any mistakes.

In contrast, blockchain technology is hyped-up in cryptocurrency circles as way to increase transparency, security and enable trustless transactions.

We urge you to look at each use-case that pops up critically, because there are hardly any talked-about use cases that require the blockchain to function well.

Read critiques and become better at separating the hype from reality – it can help you avoid betting on poor protocols and innovations such as the Internet Computer Protocol. Understanding the limitations can also help you avoid projects that make promises that aren’t feasible (i.e. moving NFT assets between games and conserving the item’s functionality).

What are Blockchain’s Issues and Limitations? – CoinDesk

Blockchain Scalability Problem – Why is it Difficult to Scale Blockchain

Why The Bitcoin Lightning Network Doesn’t Work (Yet)

Crypto’s biggest problem is not price volatility, but scalability

What Exactly is a Blockchain?

A blockchain is a type of digital ledger that allows users to transact with each other directly.

Learn How to Stop Worrying and Love the Blockchain.

Investing in cryptocurrency might seem risky because it's unfamiliar. Understand the risks and you'll have nothing to worry about.