The Top 10 Most Influential Founders in Crypto

Ten People Responsible for Starting Some of the Top Cryptocurrencies.

Like them or hate them, the prominent voices in the crypto space are larger than life and often eccentric. The stories and influences behind these founders are much weirder than you could ever imagine. Learning more about these founders tells us about their motivations and competency, two important factors to consider for any investment.

This article will look at the founders behind the most well-known cryptocurrencies including Bitcoin, Ethereum, Tron and Tether. Most of them are active on Twitter but some remain secretive, secluded and in the case of Bitcoin, anonymous.

The era of Bitcoin was ushered in by a pseudonymous person that called themselves Satoshi Nakamoto.

In October 2008, he published the Bitcoin whitepaper onto a popular cryptography website, metzdowd.com. In January of 2009, the Bitcoin network went live and Nakamoto released the software that would mine first Bitcoin.

This first block is called the “genesis block” in which he inscribed a text in reference to the economic crisis at the time: ‘The Times 3 January 2009 Chancellor on brink of second bailout for banks’. Nakamoto was the only miner for the first 10 days, where he accrued more than 1 million in Bitcoin. He later engaged on the bitcointalk.org forum.

He handed over control to a software developer named Gavin Anderson in 2011 and sent one last email:

“I’ve moved on to other things. It’s in good hands with Gavin and everyone.”

To this day, no one knows who Satoshi Nakamoto really was or is. Theories and speculation about his real identity continue.

Satoshi also holds more than 1.1 million Bitcoin which has remained in “his” wallet, unmoved spurring speculation that the person behind the network may have died. Or they cannot access the funds. Or both.

Jack Dorsey, Bitcoin maximalist and founder of Twitter and Block

Jack Dorsey may be one of the most influential Bitcoin maximalists in the world.

Dorsey was the co-founder, and until recently, the CEO of Twitter and the founder the payment platform Block, Inc. He is highly critical of non-Bitcoin cryptocurrencies as well as the venture capital hype surrounding Web3.

Dorsey is also responsible for developing the controversial Bitcoin Academy, providing education on Bitcoin in collaboration with Jay Z.

While he is unlikely to develop any new cryptocurrencies or Alt-tokens, he has begun hiring for an initiative called “Web5”, to bring about a decentralized internet.

bitcoin is becoming a critical tool for many in Africa and Central and South America. We believe the same potential exists within communities in the US. Our goal is to prove that making powerful tools more available to people enables them to build greater independence.

Ethereum and the Alts

Believe it or not, the idea for Ethereum came about because Vitalik Buterin was frustrated with World of Warcraft.

“I happily played World of Warcraft during 2007-2010, but one day Blizzard removed the damage component from my beloved warlock’s Siphon Life spell,” Buterin wrote in a bio hosted at about.me.

“I cried myself to sleep, and on that day I realized what horrors centralized services can bring.”

After travelling for six months to speak with different Bitcoin developers in 2013, he became convinced that he could build a better blockchain. He believed the Ethereum would provide more functionality through the use of algorithms called Smart Contracts, allowing code to be executed on Ethereum.

Ethereum was publicly announced in 2014 and funded through an initial coin offering later that year. Buterin received the Thiel Fellowship Grant of $100,000 allowing him to focus on developing Ethereum.

Today, Buterin is in part responsible for the proliferation of decentralized applications, altcoins, NFTs and DeFi.

After leaving the Ethereum team, Charles Hoskinson wanted to create a better alternative to “provide a more balanced and sustainable ecosystem” for cryptocurrencies. This gave rise to Cardano, a popular cryptocurrency with a slow development cycle more akin to academia than industry.

The open-source blockchain constantly undergoes peer-review to ensure that its heading into the right direction. Hoskinson along with the non-profit foundation run by Cardano aims to educate people in other countries about cryptocurrency to tackle economic issues at scale.

Hoskinson has carefully curated an image of an intelligent technology entrepreneur and mathematician. While Hoskinson claimed he dropped out of a prestigious PhD program, a journalist researching the area named Lauren Shin found that the school only had him enrolled as an undergraduate.

Hoskinson is notorious for having a low tolerance trigger finger for blocking other users on Twitter, even after asking simple questions. 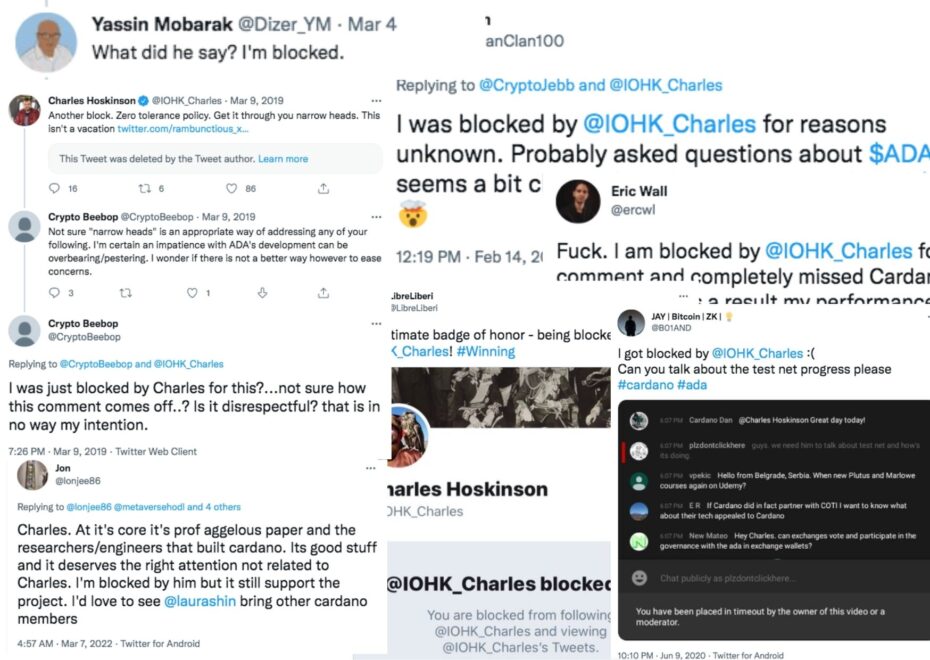 What’s so Great About Cardano (ADA)?

Cardano was created in response to challenges faced by Bitcoin and Ethereum.

CZ sits atop a crypto throne, as the founder and chief executive of the world’s largest cryptocurrency exchange, Binance. On the company’s website, there is a mythologized biography describing a rags to riches story: CZ used to work at McDonald’s and then bought a bunch of Bitcoin with his savings.

In July of 2017, he launched Binance through an initial coin offering of a token called BNB, which can reduce the fees a user pays on the trading platform. Binance recently invested $200 million into Forbes, allowing them to control more of their message surrounding cryptocurrencies and quickly issue responses to critical reporting. He is also a prominent voice on Twitter.

Binance Smart Chain 101: Everything You Need to Know About BNB.

The Binance Smart Chain has a massive market cap and growing ecosystem, but is it really all that great?

Do Kwon, Founder of Terra

Do Kwon is a key figure in the stablecoin ecosystem, developing an algorithmic stablecoin called Terra (UST) which was built with ecommerce in mind. It boasted lower transaction fees than other payment systems. But to boost their volume and market cap, they resorted to Ponzi-nomics using the Anchor protocol, which offered 20 percent yield.

When Terra became lost its peg to the USD, he urged his followers on Twitter to keep buying. Unfortunately, as many economists had predicted, Terra collapsed.

Do Kwon is now trying to do it all again with Terra version 2.0.

According to CoinDesk reporting, Do Kwon  had previously started another algorithmic stablecoin (at the same time he was supposed to be working on Terra) which also collapsed spectacularly.

Justin Sun made it big in September 2017 at the peak of the initial coin offering craze. By copying the code of Ethereum and forking it, he founded Tron (TRX) and made $70 million through the offering. This was a bit brash given that the Chinese government banned initial coin offerings just days before.

Somehow Sun made it to Seoul, South Korea, just barely skirting the authorities. He has been criticized for insider trading and tax evasion, as well as promoting pump-and-dump schemes. In December 2021, he left Tron to become a diplomat for Grenada and granting him diplomatic immunity.

Having left Ethereum in 2016, Gavin Wood founded a blockchain company called Parity Technologies, as well as the Web3 Foundation. Through Parity, Wood developed the infrastructure needed for making Polkadot. The company ran their initial coin offering in 2017, raising $145 million.

The Polkadot chain is unique as it allows the exchange of assets on different blockchains.

The first version went live in 2020, using a Proof-of-Authority consensus algorithm developed by Wood himself. His personal life isn’t as colourful, loud or controversial as some of the other figures in this article, but he is noted for his key role in the ecosystem.

What is Polkadot? The Promise of Connecting the Dots.

Everything you ever wanted to know about DOT.

Anatoly Yakovenko moved to the U.S. from Ukraine in the 1990s and became fascinated with coding as the dot-com boom developed. One night at four in the morning, he had a breakthrough idea: using the passage of time to help order different transactions on the blockchain. This gave rise to Proof-of-History validation, which is used in conjunction with Proof-of-Stake in Solana.

After a successful initial coin offering, Solana was launched in 2017 to help overcome the limitations of Ethereum. Mainly, this blockchain would be blazing fast allowing for more scalability. However, in recent years Solana has been criticized for its outages as well as the high-level of node centralization.

He stays out of the limelight but is an important name to remember.

What’s so Great About Solana (SOL)?

Sam Bankman-Fried is the child of two Stanford professors who studied physics at MIT before getting into finance. He first joined a quantitative trading shop called Jane Street in 2014 but eventually left to make his fortune in Bitcoin.

Bankman-Fried started Alameda Research in 2017 to take advantage of different prices between exchanges. He could buy assets for less in another country and sell them for more in Japan. Later he built the crypto exchange FTX. Some suspect that Alameda Research uses information about the financial positions of FTX customers to trade against them and profit. Additionally, his companies are one of the controversial stablecoin Tether’s main partners.