Can Anyone Mine Bitcoin?

What about other cryptos?

Are you interested in venturing into Bitcoin mining as a source of income or curious about the process of creating digital currencies? In this post, we’ll help you understand the principle behind Bitcoin mining, how it works, and whether it’s profitable.

What is Bitcoin Mining?

Bitcoin mining is the process of creating new Bitcoins. It is also the process of verifying Bitcoin transactions and adding blocks transaction into a public blockchain ledger. Miners are paid for securing and maintaining the Bitcoin network.

Bitcoin mining is done by miners. Anyone with the sophisticated mining hardware, a lot of power and fast reliable internet access can participate.

How Does Bitcoin Mining Work?

Miners compete to solve the complex computational problem –  they are looking for a valid 64-digit hexadecimal number called a “Hash”. A hash represents all the transaction data contained in a block. Hashing is a way to compress everything contained in the block of data. Each block has its own unique hash.

The first miner to find the correct hash validates the latest Bitcoin block and gets the block reward. Hash is vital, without it, blockchain transactions would not be tamper-proof and inalterable. It would also not be possible to tell who owned which amount of Bitcoin and at what time.

Proof of Work (PoW) is a decentralized consensus mechanism that secures Bitcoin and other cryptocurrencies. It’s used to validate transactions on the Bitcoin network and to create or mine new Bitcoin.

Proof of work is needed to make digital currencies work without trusted third parties like a company or government. The mechanism solves the double-spending problem and also makes the mining difficulty challenging, to alter any aspect of the blockchain. Furthermore, the mechanism makes it difficult for a user or a pool of users to monopolize a network’s computing power.

Bitcoin mining operations are a lucrative business because of the mining rewards. Every time a miner adds a new block of transactions to the Bitcoin blockchain they get a block reward in the form of Bitcoins. Currently, Bitcoin miners get 6.25BTC per valid block mined. 6.25BTC translates to $198,763.75.

What happens after Bitcoin mining stops?

One of the main reasons many people and corporations are into Bitcoin mining is because of the block rewards. So, what happens when there are no more Bitcoins to mine?

It is expected that miners will still be in great demand because they will be needed to continue validating and confirming new transactions on the Bitcoin blockchain. How will they earn? Through miners’ transaction fees, the fees are thought to go up in the future.

Bitcoin halving is where Bitcoin block rewards are halved roughly every four years or after a total number of bitcoins of 21,000,000 or 210,000 blocks are mined. The process is essential as it reduces the rate at which new Bitcoins are created and thus lowering supply.

Considering the law of supply and demand, by lowering supply, demand for Bitcoin is likely to increase.  Historically, Bitcoin’s price has increased several months before halving and even after the event.

Can Anyone Mine Bitcoin?

When Bitcoin first hit the market, back in 2009, anyone with a standard computer or laptop could mine Bitcoin. As more people jumped into the business the process became more energy-intensive, requiring expensive hardware and a good and stable electricity source.

Today, it’s not easy for an individual with a home set up to profit well from Bitcoin mining. So, yes, anyone can mine Bitcoin but not everyone can earn well from the venture

If you wanted to become a Bitcoin miner you’d need several things:

Power
Bitcoin mining has given rise to computers specifically designed for mining Bitcoin. The bitcoin mining rigs  don’t come cheap with almost all ranging from $1,000 going up. Alienware Aurora R11 Gaming Desktop is one powerful computer that comes highly recommended for Bitcoin mining.

Some of the features that come with the Alienware Aurora R11 include Intel’s i7-10700KF processor, which offers 8 cores with 16 threads for multitasking, and Nvidia GPU.

ASIC
Powerful computers make GPU’s an integral part of their Bitcoin miners. However, there is another class of mining machines  known as ASIC miners. ASIC or Application-Specific Integrated Circuit is a special kind of mining hardware launched in 2013. It is simply a microchip specifically designed for the sole purpose of mining.

Bitmain Antminer S5 is a good example of an ASIC for Bitcoin mining. This ASIC stands out as it operates a low power supply, meaning it is not energy-intensive and is specially designed for hobby miners and beginner Bitcoin miners. Other ASICs include Avalon 6, WhatsMiner M3X, and Dragonmint T1.

Compared to GPU miners, ASIC miners are highly efficient and more profitable. One of the many reasons why is because ASIC miners offer 100X more hashing power and use significantly less power. Another reason is that they are built to mine only a particular cryptocurrency. You can only use the Bitmain Antminer S5 to mine Bitcoins and not other cryptocurrencies.

Speed
Contrary to popular belief you do not need much bandwidth to mine Bitcoin, you need speed. There have been instances where Bitcoin has been mined successfully with internet speeds of as low as 500Kps. However you’d want nothing less than 15Mps.

An internet connection is only needed for data syncing, so the real challenge in Bitcoin mining lies in finding powerful mining hardware.

Electricity
Bitcoin mining gets expensive as the cost of electricity comes into play.

Besides Bitcoin transactions, Bitcoin mining is another energy-intensive activity. Research done by Cambridge in February of 2021 revealed that Bitcoin mining used more energy (121.36 terawatt-hours) than Argentina (121 Twh), the Netherlands (108.8), and the United Arab Emirates (113.20 Twh).

A report by Crescent Electricity Supply Co. revealed that Louisiana is the cheapest state for Bitcoin mining followed by Idaho, Washington, and Tennessee. Arkansas is another state offering good Bitcoin mining conditions due to its cheap electricity supply.

If you are looking to be an individual miner  it is important to consider your electricity bill. It is probably better to set up a mining farm.

You can also think of a mining pool as a group of miners acting as a single miner on the blockchain network. These individuals might not be earning as much as a solo miner would but they have higher chances of earning regularly than a solo miner would.

Here is a bar graph showing the biggest Bitcoin mining pools and their network’s hashrate. 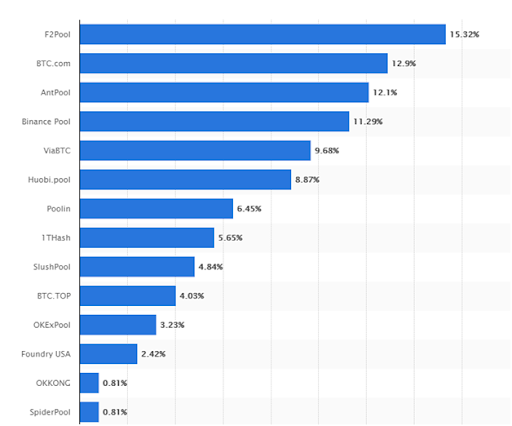 The Best Cryptocurrencies to Mine

Bitcoin stands out as one of the most valuable cryptocurrency. However, it’s no longer the easiest crypto to mine. You can only profit from Bitcoin mining if you can afford the mining hardware required, not to mention set up and maintain costs.

Other top-earning cryptocurrencies you can mine include;

Monero
Monero is a privacy-focused cryptocurrency that can easily be mined by CPUs. This cryptocurrency is a good starting point for beginner miners as expensive mining hardware is not a must. You do not have to spend a lot of money buying CPUs for mining.

One Monero is mined every 24 seconds, which is faster than the 10 minutes mark of Bitcoin. Miners get a block reward of about 4.99 XMR, which equates to approximately $1,250 (if the value of XMR is $250).

You can mine Monero solo or in a pool. Some of the available mining pools include MineXMR.com, SupportXMR.com, and xmr.nanopool.org.

Zcash
Zcash is another privacy-focused cryptocurrency that can be mined with GPUs and CPUs. It is also another great starting point for crypto beginner miners.  This cryptocurrency offers a cheaper way to start mining cryptocurrencies.

Zcash block reward stands at 3.125 ZECs, which is more than $300. Block reward is offered after every 75 seconds, which is the time taken to mine a block.

If you don’t want to mine Zcash alone, you can mine the coin through ZEC mining pool, FlyPool, NanoPool, and SlushPool. ZEC mining pool currently stands as the best Zcash mining pool.

The coin offers several ways it can be mined. As a miner, you are not limited to a few options. For example, it can be mined with Ethminer, Claymore Miner, FinMiner, GPU miners, and Nanominer. The coin can also be mined on a VPS server.

Some Ethereum Classic mining pools include Nanopool.org, 2Miners, Ethermine, f2pool, and P2pools among others. You do not have to mine the coin alone.

Litecoin
Litecoin is a fork of Bitcoin. The cryptocurrency came to be to try and solve some of Bitcoin’s inefficiencies. The plan was for the coin to be mineable with a CPU or GPU. However, that never came to be as it is currently only mineable profitably with ASICs.

Litecoin borrows a lot from Bitcoin. For example, its current block reward is 12.5 LTC, which is $0.14425. The block reward is expected to be halved in four years. A block is mined within 2.5 minutes.

If you want to mine Litecoin through mining pools some of the available ones include Litecoinpool, MinerGate, AntPool, F2Pool, and ViaBTC.

Is it worth it?

Bitcoin mining is and will continue to pay off for those who can afford the cost of computing power and electricity.

The rest of us, maybe not so much.The last Bitcoin is expected to be mined in 2140, so Bitcoin miners still have time to profit from mining, not to mention taking advantage of the other Bitcoin uses

As lucrative as Bitcoin mining might be, it’s just not the best option out there. Bitcoin mining has become a very expensive venture  and best left to huge mining firms.

If you’re thinking of getting started in crypto mining, you could consider cryptos like ZCash, Monero, Litecoin, and Ethereum Classic.